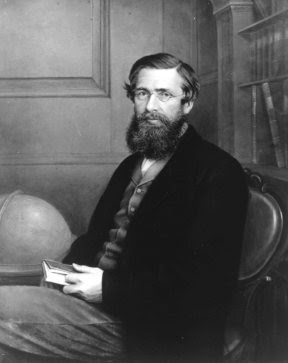 If someone asks who founded the Theory of Evolution, most people would say Charles Darwin. And rightly so. Ever since he published his "On the Origin of Species", the scientific world has never looked back. Today, nobody questions if man evolved from apes, even though scientists are still looking for that missing link.

Yet Charles Darwin credits himself only as a co-founder of the theory of evolution. And he readily admits that his conclusions were remarkably similar to that of his contemporary, the naturalist Alfred Russel Wallace.

Independently, Alfred Wallace had, from his explorations and scientific studies, developed his own theory of natural selection. He spent 8 years exploring and studying the flora and fauna in the jungles, mountains and regions of the then Dutch East Indies. Today we know this region as Malaysia, Indonesia, Singapore, New Guinea or collectively as the Malay Archipelago. 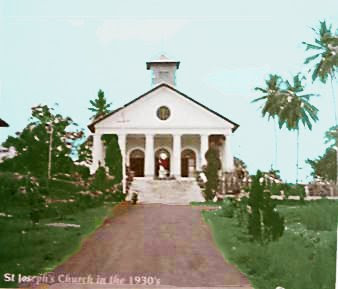 I first heard of Alfred Wallace in 1972, when my then parish priest, Fr Rene Challet, MEP (d.2003), told me that Alfred Wallace had stayed at St Joseph Church in 1854, right in the very building where we were having our conversation. From then on, my interest in Wallace grew and I started digging all the facts I could about this man who co-discovered the theory of evolution.

From his seminal publication, The Malay Archipelgo, I learned that not only did Alfred Wallace stayed at St Joseph but that he did all his research within the vicinity of the church and that this area was the starting point for all his future research into the region that would ultimately lead up to his theory of evolution by natural selection. He mentioned in his work about the rich productive area within a square mile of the church.

Bukit Gombak, across the valley from St Joseph, where surely Wallace had explored.

Thus whenever, I am in the Upper Bukit Timah area, my thoughts always return to that of how Alfred Wallace had moved about looking for his insect specimens in the very same area where I used to run around in my younger days - today's Chestnut Drive, Gombak, Hillview, Bukit Timah & Bukit Panjang. And more importantly, the contribution this area of Bukit Timah made to the Theory of Evolution. 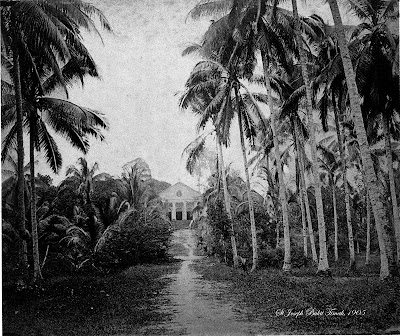 You might be interested to know that it was Alfred Wallace who gave the title "King of Fruits" to the durian, when he first described it in his scientific writings in 1858.

Alfred Russel Wallace has always been my hero. His life as an explorer scientist in the 19th century and his writings about all the places in the malay archipelago should qualify him as the pre-eminent travel writer of the 19th century! The earliest blogger perhaps? He deserves a place with the likes of Marco Polo and Ibn Battuta, other great travel writers from the past.

I append below an extract from "The Malay Archipelago" which contains the pertinent description of the St Joseph Church area at Bukit Timah in 1854. If you would like to read the entire book, just click on the link above.


"In the interior of the island the Chinese cut down forest trees in the jungle, and saw them up into planks; they cultivate vegetables, which they bring to market; and they grow pepper and gambir, which form important articles of export. The French Jesuits have established missions among these inland Chinese, which seem very successful. I lived for several weeks at a time with the missionary at Bukit-tima, about the centre of the island, where a pretty church has been built and there are about 300 converts.

The island of Singapore consists of a multitude of small hills, three or four hundred feet high, the summits of many of which are still covered with virgin forest. The mission-house at Bukit-tima was surrounded by several of these wood-topped hills, which were much frequented by woodcutters and sawyers, and offered me an excellent collecting ground for insects.

In about two months I obtained no less than 700 species of beetles, a large proportion of which were quite new, and among them were 130 distinct kinds of the elegant Longicorns (Cerambycidae), so much esteemed by collectors. Almost all these were collected in one patch of jungle, not more than a square mile in extent, and in all my subsequent travels in the East I rarely if ever met with so productive a spot. This exceeding productiveness was due in part no doubt to some favourable conditions in the soil, climate, and vegetation, and to the season being very bright and sunny, with sufficient showers to keep everything fresh. In the same place, and during my walks in other directions, I obtained a fair collection of butterflies and of other orders of insects, so that on the whole I was quite satisfied with these—my first attempts to gain a knowledge of the Natural History of the Malay Archipelago."

Postscript
For his contributions to scientific studies, the Singapore NPark has set up a Wallace Education Centre at the Bukit Timah Nature Reserve Visitor Centre. I believe it just opened in May 2009 but I have yet to visit this. I'll tell you more after my visit there.