Photography as my hobby - Part 3 Been there done that

As my dads' interest waned, I 'inherited' his cameras. His favorites were the Polaroid Land camera and the twin lens Rolleiflex but what I wanted was only his SLR - the single lens reflex camera. It was an Asahi Pentax Spotmatic II.

The Asahi Pentax was the camera that revolutionized two things.
It was the 1st SLR camera. It used a prism to reflect the image directly to your eyes and you saw exactly what the lens saw. Secondly, it had the 1st built-in TTL (through the lens) exposure metering. This meant you not only saw the picture you are going to shoot but could also adjust the exposure settings on-the-fly.
Today, all these are taken for granted but at that time it was at the leading edge of camera technology. 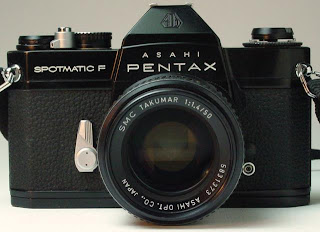 For years this was the only camera I used. I bought extra lenses like the 35mm wide angle and 135mm telephoto, which was all I could afford at that time.

In secondary school, I started the Photo Club and persuaded the Principal, Mr Rudy Mosbergen, to allow the Photo Club to take the annual class photos for the school. This was previously done by a professional and we explained that we could do the job not only cheaper but the profits from selling the class photos to students would go towards buying equipment for the Photo Club. All the class photos were shot using my Asahi Pentax camera.

After my school and college days, I continued to upgrade my equipment and by this time Japanese manufacturers had all but cornered the camera market. Going into adulthood and working meant more disposal cash for equipment purchases.
By then, I had become a Nikon die-hard.

In November 1984, an event was to happen that would thereafter change my outlook towards my photography hobby. Something that was so momentous, so consequential,  that I was not to take up photography again for almost 2 decades - I got married!

In Part IV, the final part, the digital re-introduction to my hobby in photography.