Photography as my hobby - Part 1 The beginnings

My interest in photography started when I was given my first camera, a Kodak Brownie 127 on my 10th birthday back in 1965. It was a simple little plastic box camera but to me it was the coolest gadget ever. 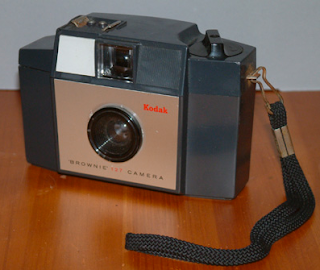 It literally used a roll of film in a protective light-proof wrapper which you had to carefully unroll to avoid accidental exposure and fit onto the rollers inside the camera. As you took each picture, you had to turn the rollers manually to advance the film.
It was the earliest WYSIWYG before the computer era termed it "What you see is what you get!" - there were no adjustments possible. You just pressed the shutter and hope for the best. Only 12 pictures could be taken with a roll.

Photography during my young days was an expensive hobby. That's probably the reason why so few amateur photos of those days are around now. Most people would balk at the cost of developing and printing photos. You were charged for both developing the negatives and printing the photographs.

A black and white 'postcard' size photo would cost about 40 cents and a colored print would be $2! Multiplied by 12 in each roll, it was a fortune in those days. So each and every picture was always considered carefully before being snapped! Most pictures would actually be printed in 'half' postcard size, approximately 2-1/2" X 3-1/2" which would be around 20 cents each. 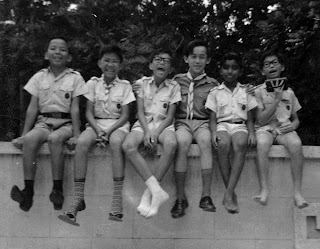 A couple of years into using my Brownie 127, I was given an 'upgrade'.
My dad bought me a Kodak Instamatic camera! 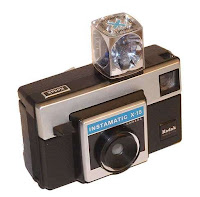 The Kodak Instamatic was 'hi-tech' - it used a pre-loaded film cartridge instead of roll films. You could now get 20 exposures from each cartridge, and the neatest thing was that it had the latest photographic technology - Flash Cubes! The disposable flash cubes had 4 flashes and you could take pictures indoors now.

In my next blogs, I will tell you how I progressed to developing and printing my own photos, buying my first SLR camera and finally going digital in part III.

Related links:
Part 2 - Developing skills.
Part 3 - Been There Done That.
Posted by James Tann at 5:35 PM