Sounds like a piece about motorcycles and the thrill of speed?
No, the term was used by the then transit operator, MRT Corporation and the Land Transport Authority (LTA), when they were looking for volunteers to test the new contact-less payment cards in 2000.
I volunteered and was given this. 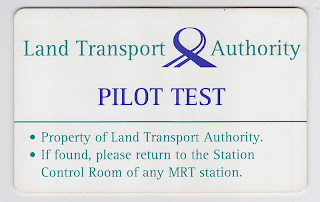 Volunteers were known as "Super Riders' and we had to make a minimum of five trips on the train each week. To make it worth our while, we were given a 10% rebate for all our trips at the end of the test period from Sept 2000 to Feb 2001, We were also entitled to a special commemorative contact-less card when it the system was launched in 2002.
After the initial MRT tests, the scheme was extended to include the contact-less system on buses. There were more problems I remembered using it on the buses as some drivers at that time were still not familiar with the new cards.
The contact-less system was introduced in 2002 and was called EZ-Link. This was been replaced in 2009 with the current EZ-Link CEPAS card which can be used for more mercantile transactions.