Is it mine or yours? St Theresa's or St Mary's

I have this thing that's actually been bugging me for years and years.
I am sure it is wrong and yet I have not been able to get out of my malaise long enough to find out more, much less correct it or manage to do anything about it.
So I have been living with this irritation in the back of my mind all my life.

And what is this? It is St Theresa's Convent.

No, nothing personal against the school or the staff or her alumnae.
It is just the use of the name. Or should I say mis-use?

Even when I was a schoolboy passing the institution at Telok Blangah I have had this nagging thought that the name is wrong. After all these years, whenever I pass it now I still have that same feeling. Of all places, a school should not be called St Theresa's Convent! 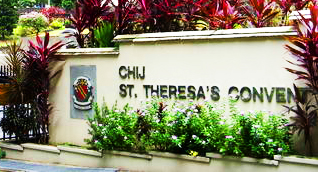 And why not, you ask?   Well, it's simply incorrect, plain and simple.
Don't they have English language teachers who should have known that it is incorrect all these years?

Putting the 's behind St Theresa makes it the possessive of the proper noun, i.e. the convent belongs to St Theresa. But this cannot be as St Theresa died long before the convent was built and I am sure she didn't have possession of it at any time.

I searched their website but could not find any reason why the convent belongs to St Theresa. Often in the past, I had the thought of dropping them an inquiry to this effect but again never got around to that. haiz

So presumably, the convent was named after that humble nun, St Theresa. Therefore, it should be called St Theresa Convent and not St Theresa's Convent.

We honour famous people by naming  buildings, streets, places or even convents after them but it surely would be as a proper noun and not in the possessive syntax. It's like calling the Fullerton Building Fullerton's Building, or even horrors, as one Straits Times reader recently suggested renaming Singapore Changi Airport to Lee Kuan Yew Airport, it might then become Lee Kuan Yew's Airport instead!
*(Lee Kuan Yew, the former prime minister of Singapore)

I hope to find some closure after all these years by speaking it out.
Any Theresians or English teachers reading this?

Closer at heart, I attend a catholic church called St Mary of the Angels. There, the welcoming ministers a.k.a the wardens, wear a sash proudly emblazoned with the words St Mary's.
I always wonder if that is also incorrect but I'll let that pass as they may associate their group as belonging to the Church, rather than being the name of the church, which then would be more or less correct. Guess it depends on how you see it.


Disclaimer: No Theresians were harmed in the writing of this piece. Any similarity to saints, persons or alumnae dead or alive is purely coincidental.
Posted by James Tann at 2:41 PM