Getting it back from the bus companies. 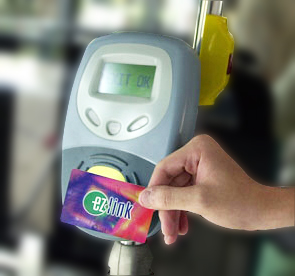 How often do you look at the fare card reader on disembarking? Like most commuters, I rarely give it a glance. As long as I hear the beep, I assume that the fare has been correctly deducted from my EZ-Link stored value card.


How much was the fare and how much was deducted are not in my mind. I usually glance at the readout for the balance left in the card in that fleeting moment that the details are flashed.


We have become so complacent that we actually never bother to find out the cost of our bus or train trips. As long as we have enough value in our cards, we simply proceed with our journey.


When the bus and train companies implemented the new distance related fare structure in July, I still had not changed my habits. But I did note that the bus trip to my office would now cost $1.33.


Then about 2 months back, I noticed that on some trips the meter would read $1.37 instead of $1.33. At that time, I simply put it as technical glitch and though just a bit irritated over the excess didn't bother about the additional 4 cts charged.


Then it started to snowball, and that made me a bit suspicious that something might be happening with the bus fares. Were the bus companies knowingly overcharging and making an extra dollar without the commuter being the wiser?


Mentally I worked out that at 4 cts a trip, I would have paid an additional $30 extra a year just to get to my office. This was unjustified! Imagine multiplying this by the number of passengers taking the bus each day! The amount would be a staggering scandal.


So I decided to fight back and claim for that tiny amount of 4 cents on a matter of principles. The bus company is not entitled to charge me extra for the journey, so why should I give them the 4 cents?
On the contrary, if I had underpaid by 4 cents, they have the 'right' to impose a penalty of $20 on me according to their regulations. So what right have they to take extra from me and get way with it?!


On the Transitlink website I found a Refund Claim Form and sent it off.  Refunds once approved would be made either by direct inter-bank transfer, by cash, by cheques or by vouchers. I opted to take a voucher.
Within 2 days I had a reply from the bus company. 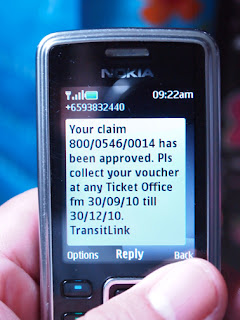 I had expected to get a voucher for 4 cents but what I got was a 'complimentary' voucher for a free bus trip. Truth is, it wasn't totally complimentary as it had cost me 4 cents, but at least I could use it for a journey beyond 4 cents distance with their compliments, ha ha.

As of today, I have claimed a total of 4 vouchers from the bus company. Not a bad reward for getting back at them for overcharging.
VINDICATION !
The bus companies yesterday (Nov 23, 2010) were reported by the media as admitting to having overcharged commuters to the tune of $300,000 since implementing the new fare structures. They are now trying to work out a scheme to refund all the excess back to commuters, but I really doubt if most would bother, as admittedly most passengers were overcharged 4 cents.
Dividing $300k by an average of 4 cents means almost 7.5 million rides were overcharged and the media had reported that only 180 commuters had made claims for overcharging! Talk about apathy! But I am very sure that 99% are unaware that they were overcharged.
Here is the full newspaper report from Straits Times of 23 Nov 2010  if you wish to read the article.
http://news.asiaone.com/News/AsiaOne%2BNews/Singapore/Story/A1Story20101123-248610.html
Posted by James Tann at 10:04 AM