When I was younger, literally at a time when the policemen wore shorts, I lived in the Upper Bukit Timah area. From the mid-50s till late 60s, I lived at a small estate called Princess Elizabeth Estate and then later a a nearby development called Fuyong Estate. PE estate is now demolished and Fuyong Estate is better known as Rail Mall.

Growing up in those lean years meant activities were all self made. Our playground ranged from the hills of Bukit Gombak, Bukit Batok, Bukit Timah and all the way to Bukit Panjang. Exploring the area, hills and jungle was the main activity for us gangs of schoolboys since places like amusement parks, shopping centres were all but non-existent.

From the old British radar station on Gombak to the quarries at Bukit Timah, the farms at Cheng Hwa and the dairy farms were the places we 'explored' in our free time. All these places were within a 2km radius from Hillview. And yes, there really were lots of cows at Dairy Farm, where now condominiums have replaced the farms.

Old pictures of the dairy farms at Upper Bukit Timah 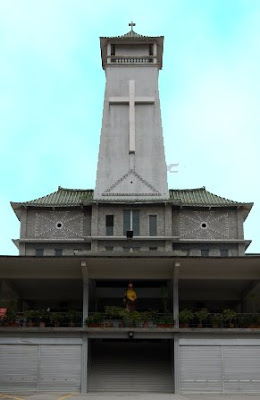 But perhaps central and most important feature of this area was St Joseph Church. Being Catholic, this was my parish church and it played a big part in life. I was baptised there, had catechism lessons and later taught religious classes, was an organist there and eventually also got married at this church.


(Picture is of the current St Joseph Church, the 3rd rebuilding on the same site. It was re-built in 1963 under Fr Joachim Teng)

St Joseph itself has a long history that is very closely related to the development of the area which few people nowadays know. It was built in 1846 and is the 2nd oldest Catholic church in Singapore. In its 163 year history, it has seen the the history of Singapore literally passing with its own history.


But to me, the one event that makes the St Joseph and the whole Upper Bukit Timah area significant was a quiet event that took place in 1854. An event that was to have a big impact on the entire human history, and it all started here with a visit by a naturalist named Alfred Rusel Wallace.