The customer is always right? #1

A few recent incidents in my profession on the front-line for my store sadly reminds me that there are still people in the world whose morality and ethics are, what I would say, still in the stone age. 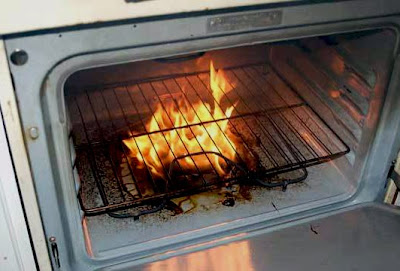 the manager.
As their complaint was on an electrical product, it became my responsibility to attend to them.
In their hands they had an electric oven toaster which they bought the day before.
"My house almost burned down because of your stupid oven"
"How can you sell us a defective oven?"
"How are you going to compensate us for the damage?"
"Who is going pay for my medical treatment?"
They all screamed and shouted in a loud chorus of blame and threats at the same time.
Seeking out the most 'reasonable' person in the group, I asked if only one person please explain and she went on like this.

They had bought the oven toaster the previous evening and she used it for the first time to re-heat some curry puffs. The oven caught fire and she had to throw water at it which then shattered the glass door. Pointing to the burnt-out ruin, she said the oven almost burnt down her kitchen and she got burnt and cut by the flying shards of glass.

From my experience I knew that new electrical appliances won't catch fire that easily unless there were some mitigating factors. So I began to probe gently.
"You were heating your curry puffs?" "Did the curry puff catch fire or did the oven itself caught fire? Metal ovens don't usually catch fire unless something inside it is burning like your curry puffs"
"The curry puff was on fire and the oven started burning la!"

"So you were heating the curry puff and wasn't watching it when it caught fire? Miss, in order for food to burn it must be heated till it becomes like charcoal, then the carbon will burn with the oil vapours! How long did you set the timer on for?" "About 10 minutes", she said.

"That means it was your food that burnt the oven and not the oven itself caught fire. Did you know that unattended cooking is the #1 cause of household fires in Singapore? The glass shattered because you threw cold water on it , which you shouldn't have anyway because you are throwing water on a live electrical equipment!"

At this stage it was apparent to all around now that they had a lost cause.
Still out of courtesy as a store customer, I did an exchange of the burnt oven for a new one.

Though I believe the situation came out all right for all parties, I am really saddened at the attitude of some customers who simply refused to acknowledge their own faults and failings. sigh.

I'll write about a few more incidents in my next article. bye.