The news this week

WHY MAN STILL BEHAVE LIKE SCUM.
The German Osnabruck University this week confirmed Charles Darwin's comment to his friend Dr Joseph Hooker 140 years ago that life most probably originated from a tepid pond and not from the ocean as commonly believed.
Conditions in the primitive oceans were not conducive for life to evolve from its primordial soup but the scum in warm tepid ponds were ideal for it.

I guess this explains why some people still behave like the scum of the earth. It's genetic. Mystery solved. 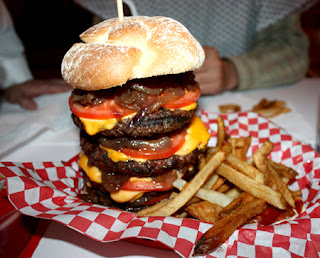 The Heart Attack Grill in Las Vegas offers a 1.5 lbs burger free to anyone weighing over 159kg. One customer was hospitalized on Wednesday after the massive meal.

The irony of this excess gluttony is an article directly below this report: 1 in 4 children worldwide are malnourished.
I am sure it's for us to take note of the social ills and imbalances that still pervades our societies.

American Academy of Neurology will publish new research data this coming April to show that slow walking leads to a greater chance (1.5x) of getting dementia.
I hope I can remember that in future.

But another Swedish research from Linkoping University found that curry, esp the spice tumeric, decreases by 75% the chance of dementia in fruit flies. Good news for curry eating fruit flies!
But it also did say that there are fewer demented old folks in India than in European countries.

Get my running shoes out, I am going for fish head curry today!

A global survey on sexual satisfaction by Durex found that Singapore rated only 58% in satisfaction in the bedroom. This is just ahead of Japan at 34%.
Just ahead? What happened between 34 and 58%?