DON'T RAIN ON MY PARADE, PLEASE!
Urghh! What a disappointment for me!
Today all 162 pachyderms from the Elephant Parade are gathered at one spot at the Botanic Garden for public showing and it has to rain on the parade. I am still hoping it will clear by afternoon though the sky doesn't look so inviting. There goes my video opportunity.

Anyway, for those of you who also can't make it today, it'll be at the Eco garden near Botanic Garden MRT entrance till 11 Jan 2012. (9 am till 8pm) Sadly I got lots of work these few days and so today was my only chance, sob sob.

Luckily, thanks to my sister Sue, I have this for my Christmas present. 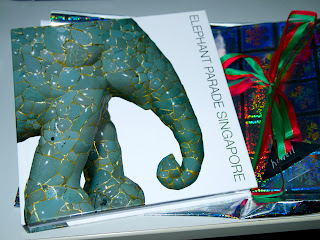 POLICE CLARIFY RULES ON CLUSTER CYCLING
Finally, after years of complaints and virtual non-replies, the Traffic Police (TP) has clarified the rules for cyclists.

Rule 7(1) - prohibits a cyclist from riding on the right right of another vehicle (which is not another bicycle) unless the cyclist is attempting to overtake that vehicle.

Rule 7(2) - allows for only two cyclists to ride abreast in the same direction on a public road, except when overtaking.  If three or more cyclists are riding in a group, they are required to ride in pairs or in single file.

Rule 8 - cyclists should keep to the left-hand edge of the roadway and not in a manner as to obstruct other vehicles moving at a faster speed.

Rule 10 - requires cyclists to cycle in an orderly manner and with due regard for the safety of others.


All well and good, and this is a step in the right direction.
However, I am not a cyclist. I am a pedestrian.
My own concern is with Rule 28. When is the TP going to enforce Rule 28 ???
Rule 28 needs to be clarified asap. My life is in danger otherwise.

Rule 28 is supposed to say cyclists are not allowed to ride on the pavement.
Supt Ho Yenn Dar, can  you come again, please.

But (not laughing at him, I must clarify), it is so funny that some party (no mention of whom) has made him the Ambassador for Stroke Prevention!
It's so laughable because it's getting someone who did not do anything to PREVENT his own condition to advise people about stroke prevention?
It's like asking OJ Simpson to talk about knife safety or Saw Phaik Hwa to do MRT crowd control during peak hours...
He is the antithesis of stroke PREVENTION.
Instead he should volunteer as a case study for POOR STROKE PREVENTION attitudes.
I await his learned wisdoms.

DBS BANK ADVISES CUSTOMERS TO CHANGE PASSWORDS
I am happy that DBS managed to handle the incidences of unauthorized withdrawals in an expeditious and transparent manner. Kudos to them.
What I didn't particularly like was the spokespersons' suggestions that we are responsible to regularly change our passwords. It seems he's throwing the onus of responsibility back to the customer.
It's my fault if I don't change my password?
If a masked robber cames in and takes the money from your cashier, it's my fault also because I was standing in the queue?
DBS was robbed, not me! You lost the money from your bank by some virtual masked robber!
My money is secured with your bank and you owe me. It's your responsibility for the loss.


* Sunday Rantings are my thoughts on a lazy Sunday morning after reading the Sunday papers. This may or may not be a regular feature depends on whether I have the energy after breakfast. Also Sunday Mass has a calming effect, so the more I pay attention to the sermons, the less I rant. The long rants probably mean I fell asleep during Mass.


p.s. By the way, if you noticed I haven't been updating this blog, it's because I've been focusing on my heritage blog on my old homestead Princess Elizabeth Estate (here). But I'll be here regularly i assure you. Thanks for visiting my blog.
Posted by James Tann at 2:48 PM