A revelation from beyond the grave.

The century old Bukit Brown cemetery will soon give way to the growing needs of an ever developing Singapore. Gazetted by the government, about five percent of the graves will have to be exhumed to make way for a motor highway bypass.

My paternal grandparents are buried at Bukit Brown.
With the impending exhumation, I realized that my deceased relatives may be affected.
But there is one big problem.
I never knew my paternal grandparents.
My grandfather was Tann Cheng Hoe who came to Singapore from Amoy, China and my grandmother was Khoo Kim Lian, a local betel nut chewing Peranakan bibik. 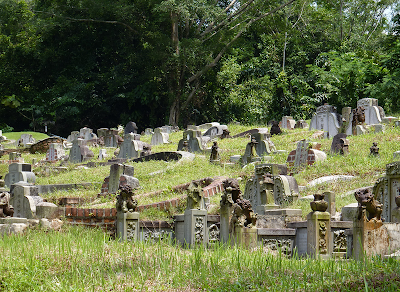 My father did take me to their graves when I was perhaps 4 or 5 years old. Even at that young age, I can recall visiting the cemetery on at least two occasions. I remembered my dad paying obeisance in the traditional manner with wine, fruits and burnt paper offering. I remember how exciting it was to place colored paper all over the graves that had its covering turf newly mowed.

Over the years, my dad didn't seem to follow up on this practice during Qingming for whatever reasons I had never asked. Perhaps it was the fact that he converted to Catholicism, or was it the squabble over the inheritance, or whatever. I will never know now because my dad passed about 10 years ago.

The only other relative that I knew my dad had was a sister who was given away for adoption. She is believed to be living in Malaysia but then we only met her once and there were no further contacts after that. The fact that she was given away for adoption would also mean that her relationship to my grandparents would probably be very superficial.

So with this in mind, I sought out my last possibility - my mother, who hopefully would recall her 'in-laws'.
Alas, my mother had very scant knowledge even of her own in-laws, but related a story that even up till now I was unaware.

She had met her parents-in-law only twice in her life; the first time on her engagement and the second, on the day of her marriage. Life was such at that time, she said.

She revealed that my grandfather had been a very rich merchant dealing in shipping and warehousing. They lived at Choon Guan Street in Chinatown and he had businesses at Boat Quay.
My grandfather had four wives!

My dad was born to the 3rd wife and so his position in the family was only secondary if he had any at all. His sister was given away for adoption as they didn't need daughters.
She could not recall much more than this as her relationship with her in-laws was very distant.

But she could recall the approximate locality of their graves.
"Just a short distance in from the entrance.
Look for the huge grave of Aw Boon Haw (of Tiger Balm fame) on the right side of the road.
Their graves are just directly further up the hill from Aw Boon Haw and next to a pavilion."

However, my quandary now with my dad being the '3rd family', there would be the other 3 families who might make claim to the graves as well. Should any of the other sons, i.e my dad's half brothers, be around then it would be their responsibility to attend to the exhumation.