My life as an aeroplane.

What's in a name? that which we call a rose
By any other name would smell as sweet;
- William Shakespeare.

Shakespeare was just being eloquent.
He was a romantic but he is wrong about the name part!

Names do matter. There is a lot to be had in your name.
It carries with it your identity and your entire psyche is shaped as a result of what others call you,
or worse, what they perceive of you without even knowing more of you.

Take a simple name like Juliet, for example.
You start to have a romantic notion of beauty. With a name like Juliet she must be so sweet. She may turn out to be the hunchback of Notredame.
Say Rambo and they picture you as a macho muscle rippling dude who may however turn out to be a paunchy baldy loser. Names are everything ! 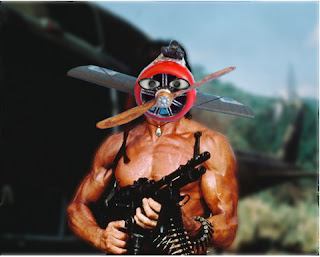 Lately, I connected up with some people on an online chat site.
(Yes Ma, I know the dangers of chatting with strangers on line, so stop bugging me!)
We did not know each other at all and the only common thread was that we all used to live in a small village estate in Bukit Timah call Princess Elizabeth.

As our online chatter progressed, we started realizing that we had more and more in common.
We knew that person, yes it's that family, he was my teacher!, I used to lived next to his house, she was my classmate! Remember this? Remember that?
Little revelations began to connect the dots and the web grew stronger and larger as the days went on.

One particular person called D. remembered that as a little boy I used to throw mud at her! Then it dawned on me that this D. person used to taunt me by calling me 'aeroplane'. The teasing was endless and it built a traumatic state in this little kids' mind.
D. was very pretty I remembered and had lots of admirers amongst the schoolboys swooning after her, but I was turned off because of her ceaseless teasing. I suppose D. is still as pretty now but I've not seen her in almost 35 years. She was a former model and I still have a picture of her taken during her modeling days somewhere. The last I thought of her was about 2 years ago when I watched the film St Jack in which she had a part.

Wrong names can be humorous or a lifelong disaster.
Some young parents today are so enamored by Korean wave, J-pops and or even gadgets that they call their children after these transient fads. Would you call your child iPad or iPod??  "Hey Nintendo Lim, how's the going?"
May sound cool now but he will be the one who has to carry this bane through his life.

I know this firsthand because I am precisely in this situation.
(No, not about D's teasing, I've long erased that from my consciousness. It's something else)


My dad was so into photography and cinematography in his young days.
In those days, the big names were KODAK, AGFA and ILFORD, much like today we say Apple, Sony or Xbox.

When I was born, besides my name James, I was given another Christian name as was the usual practice among Catholics. Guess what I was christened?
No, it was not Kodak, Agfa nor Ilford, but close.
It was Howell as in Bell & Howell, which was the biggest name in movie cameras and projectors at that time. OMG, you were was named after a projector???

Actually, the name is perfectly okay with me but the big problem is that locals can't pronounce it correctly. I've been called everything from 'Hoe-well, How Wee, to How Well" !
The correct sound is akin to the word 'howl', or if you say it slower, something like 'Har-wurl'.

Good thing my dad wasn't into cars or I could've ended up as Vauxhall James or Silverstone James!

By the way, if you strain hard enough, you might just notice some remnant of a birthmark that does look like a little bird in flight. But please don't say it's an aeroplane. Say "Hey, I like your Eagle tattoo, cool man!"...it'll make this paunchy balding man feel more macho.
Posted by James Tann at 5:14 PM