I had my first full time paying job when I was 18 on completion of my GCE A levels.
While most of my other classmates were being drafted into the army for their National Service (NS) stint, I was starting on a new phase in my life.

I joined Lockheed Aircraft Company as a trainee aircraft mechanic.
In 1973, Singapore embarked on a new economic front and focused on building up its fledgling aviation industry. Lockheed Aircraft had won a contract to refurbish 40 used Douglas Skyhawk aircraft from the US Navy for the RSAF. They offered an apprenticeship scheme which included diploma study at the Singapore Polytechnic. I was one of the selected candidates. Joining this scheme deferred me from my NS liabilities.

At Lockheed, which was based at both Seletar and Changi Air Bases, I had to undergo training for 2 years with an intensive familiarisation course before being qualified to work on the Skyhawk project.  This included getting through all the theoretical and practical tests conducted both by the company and the Dept of Civil Aviation (now called CAAS). It was grueling!

These are some of the old certificates which I have kept. 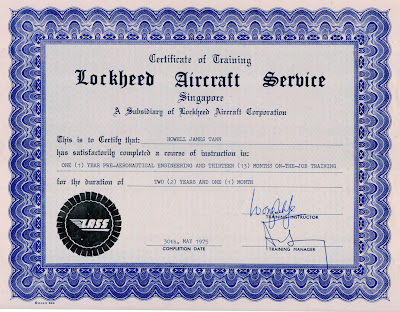 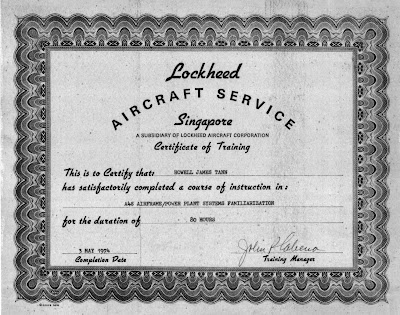 On completion, I qualified as a mechanic to work on the Douglas A4 Skyhawk powerplants (i.e. engines) and airframes. We were some of the first local aircraft mechanics. Most of the experienced guys came from the Philippines, Taiwan or India.

Unfortunately, in the late 1970s, an event called the Arab Oil Embargo occurred resulting in several casualties in the aviation industry. Lockheed Aircraft was one of those badly hit.... but that's another story, ...another blog in future.