Shame the sin, forgive the sinner.

Which do you feel is the greater shame?
Gawking at girls in skimpy bikinis.
Exhibiting your body in public.
Calling people names, or
passing derogatory remarks about others?

Not since the June general elections has a single topic garnered so much response from netizens.
There must be well over a thousand entries in blogs like Stomp, InSing and Hardwarezone over this issue of foreign workers having a day out at Sentosa! 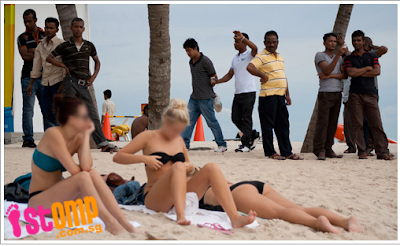 Stomper Cheryl had posted a complaint about the hordes of foreign workers descending on Sentosa Island each weekend. Her main grievance was that these foreigners were photographing and recording videos of women in skimpy bikinis suntanning on the public beaches.

The deluge of responses came from both sides of the fence but most were xenophobic anti-foreigners sentiments.
These range from name callings like perverts, aliens, black heads to downright crude remarks like ban them from Sentosa, fence off the place and or charge them $100 for entry. Derogatory terms included polluting the air, racist piece of shit, retards and mental rapists. A good number laid the blame with the government over its immigrant policies.

I have not been to Sentosa Island for quite some time and I don't know the real situation, but judging from the pictures on the blogs, I presume that Sentosa has become another of those places where the foreign workers congregate during their day off.

There are now more than 2 million foreign workers of all nationalities working in Singapore. All these people need some outlet away from their work routine. Unfortunately, their tendency to flock with their own kind has led to some very uncomfortable situations for others as in the Sentosa situation.

However, it still doesn't bode well for locals to resort to name calling and making derogatory remarks.
It easy to blame others for the predicament we find ourselves in; the overcrowded trains and buses, the long queues at the supermarkets, being served by foreign sounding staff in the shops and food courts, etc.
Unfortunately, there is a social trade off if we don't want to do the menial or 'low grade' work ourselves.

Of course, others would argue that the point is not the people or race but rather the behavior of these people when they congregate.

I feel sad that all that simmering pent up feelings might one day just boil over.
I can understand the local sentiments. I too am guilty at times especially with my pet peeve about PRC cyclists on the pavements disregarding pedestrians.
Let's just all hope we don't sink to a lower level of shameful behavior on all our part.
I pray our society is not beginning to unravel itself with this foreigners issue.