Following a private email response to my Sunday Rantings (previous blog), I just want to show some evidence of Bukit Brown MRT Station, which is not usually indicated on most official transit maps.
It is situated between Caldecott and Botanic Garden on the Circle Line.

The Bukit Brown MRT station is located at an empty plot (at the moment) at Jalan Mashhor, near Andrew Road where I work.
It is only a 'shell' station, i.e. the station concrete form has been built but not fitted out to function as an operational platform.
When it will be operational is subject to the development of the area around the station.

Mediacorp is moving out in 2016 and that will also free up a huge plot of land nearby.
The Bukit Brown station is adjacent to and sandwiched between the 2 huge cemeteries there;
the Bukit Brown Cemetery and the Chinese Cemetery at Mt Pleasant. 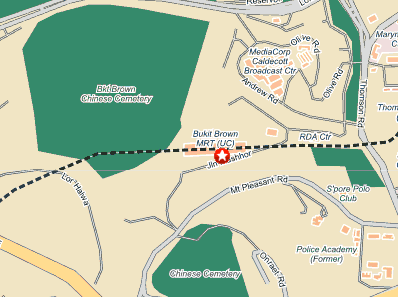 Like Marina Bay MRT Station, where the station was built years before the surrounding Financial Centre or MBS was conceptualized, the Bukit Brown area will eventually be developed, cemeteries not withstanding.

Here is another official LTA map showing future MRT stations.
You might want to consider buying some real estate nearby?


Update on Bukit Brown blog. 16 Dec 2011.
I was on the Circle Line yesterday from Serangoon to Holland Village and had the chance to 'pass through Bt Brown underground.
About 1 min after leaving Caldecott station, you start to hear a change in the sound of the rushing train due to the air space at Bukit Brown.
If you sit facing the starboard (right) side windows, you can see part of the space that will be Bukit Brown Station. It's just an empty space and you can see right across to other other tracks going in the opposite direction.
Posted by James Tann at 11:41 PM