The waterfront park at Punggol was officially opened to the public yesterday.
But I just couldn't help laughing at the newspaper report this morning describing the new waterway as the "Venice of Punggol" !


Please lah!  It's just one big longkang and they put it on the same level as Venice?

I have been to Venice and just last week I visited the My Waterway@ Punggol .
It will tire out all my brain cells just trying to think of any similarities. 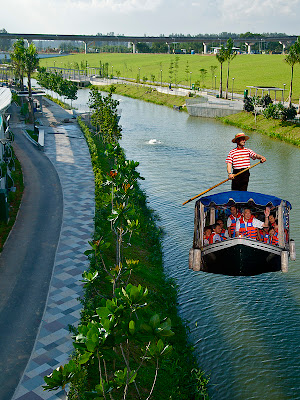 Maybe they can start a gondolier service to see the old dump, now converted to a wetland, at Lorong Halus?

I must say that the wording in the news report is so clever that you can't really tell who came up with the moniker!  So nobody can be faulted if there's any backlash! (see report here).
Maybe it's a pre-emptive way to avoid future embarrassment in case of floods like previously in Bukit Timah and Orchard Road? Or perhaps it's a new directive to rename flood prone areas to "Venice of..."

I am not disparaging the residents (Venetians?) of Punggol and congratulate them on their new facilities.
There is a long long way to go before Punggol 21+ achieves its aim of being a truly waterfront eco town, but please, be a bit more original with the names.
(Click here for my photo blog on My Waterway@Punggol)

Related links:
Visiting Punggol after 30 years.
Posted by James Tann at 11:42 AM