The public bus duopoly, SBS Transit and SMRT, today increased their fares by 1% as allowed by the Public Transport Council. For most commuters, this translates to an increase of 2 cents per trip.

Thus my trip from Bukit Batok Interchange to my office at Andrew Road will now cost me $1.35 instead of the previous $1.33. My math may be wrong but the 2 cents increase for me seem to be a 1.5% increase rather than the 1% permitted? Anyway....

I seemed to have become a watchdog over my fares ever since the bus companies introduced the Distance Related Fare System back in July.

After their initial claim that the glitches were fixed and that the overcharging incidents have been rectified, I still had a few incidences where I was still overcharged.

Just a month ago, I made my 10th or 11th claim (I forget how many now!) for overcharging.
So personally, I know that the glitches have not been fully fixed as claimed by the bus companies. 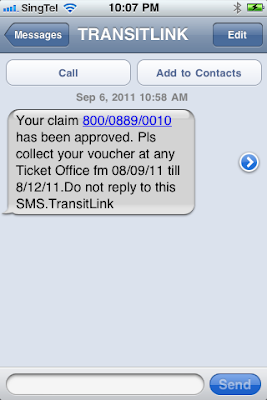 Related links:
Getting it back from the bus companies
The bus companies are still taking your money!
$300,000 in bus refunds for overcharging
Posted by James Tann at 11:19 PM