The Bridge at Gillman Barracks

If you drive along Alexandra Road, you might be able to spot an old disused bridge near the Alexandra Arch, just opposite the Hort Park. 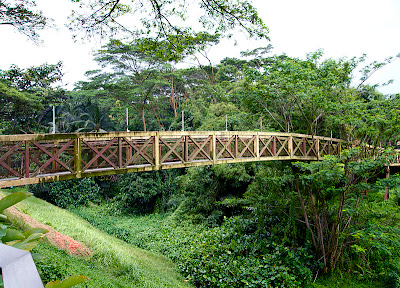 This bridge crosses over a very deep gully and was formerly within the compounds of the old British Army Gillman Barracks. In 1969, Gillman Barracks was handed over to the then newly established Singapore Armed Forces and was used by the SAF Combat Engineers as their headquarters.

Back then, Alexandra Road did not exist as it is today.
Gillman Barracks was just a part of the entire British military area that encompassed places like Portsdown, Normanton, Alexandra Hospital, and the entire area we call Ayer Rajah and Buona Vista today.

My very first encounter with this bridge was around 1970, when as part of a group of school army cadets, we were brought to Gillman Barracks as there was a proper parade ground for us to practice for the National Day Parade.

We were transported to the camp entrance and had to cross this bridge to get to the parade square.
At that time, there was hardly any vegetation in the gully and that made the bridge appear very high above the valley floor.

One thing I also remembered was that the bridge was different from the one existing now, although it is in the same location. The one I remembered was a black wooden trestle bridge like the one in the picture below. The existing bridge is a modern design steel truss bridge, which must have been a replacement. 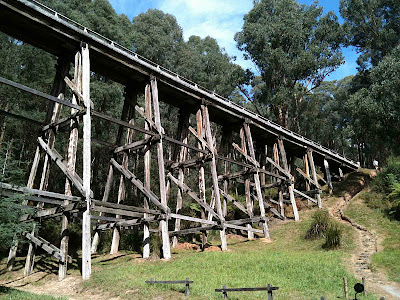 I remembered we were all really afraid to cross that bridge because of the height.
And what made it worse was a sign that said "BREAK STEP WHEN CROSSING BRIDGE"

We didn't understand what "Break Step" was.  We were told not to march as a group across but to walk individually and out of step with each other. They said otherwise the bridge might collapse! That made us even more afraid.

At that time, as schoolboys, we were not aware of the effects of resonance.
Resonance happens when regular vibration, such as soldiers marching, matches the vibrating resonance of the bridge causing it to sway in unison and can lead to collapse.

Gillman Barracks was converted to a Food & Beverage hub in early 2000 and was renamed Gillman Village. However, the response was lukewarm leading to its final demise last year.
There are new plans by the government to convert the area into a new Arts and creative production hub utilizing the old army complexes. Just like the ones at Dempsey Road today.

Any old SAF combat engineers reading this?
Perhaps you can post a picture of the orignal bridge?
Posted by James Tann at 11:00 PM