I just finished my 3rd reading of Umberto Eco's novel The Name of the Rose.
This time it took me all of 20 days to get through this tome.
Just 1 day short of the loan period from the National Library.
It was one of the  most difficult  book I have ever read, but I loved every passage of it. 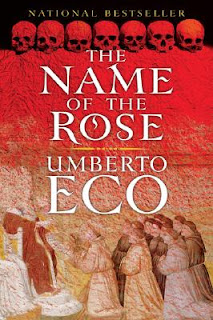 I was introduced to this novel by a franciscan friar, Fr Alban, back in early 1990s, but in truth, I gave up half way through the book because it was too difficult to comprehend. My first attempt ended up in utter failure.
It was not till almost 8 years later that I managed to read through the entire book. By this time,  a movie starring Sean Connery had been  made, based loosely on this book. I watched the movie and was totally enamored by it and that made me resolve to re-read the book.
I remembered that it was still difficult to digest but at least now I understood the gist of the novel which helped to move the pages along.
The book is vastly different but superior to the movie.
While the movie is an excellent whodunit, it really does not do justice to the book. I'll elaborate on this a little further down after I tell you of the novel.
The 2nd time I re-read the book I skimmed over a lot of difficult passages. Perhaps I had actually wanted to make a comparison between the movie and the actual novel. But I did remember that the novel was so enthralling that from then on I kept it listed as my all time favorite.
Now, after 20 years from my initial attempt, I again decided to re-read this great book but at a slower pace to get a deeper insight and to grasp the finer nuances of Eco's writing.
While the movie portrays a medieval murder mystery, the focus of the book is not on the murders but more of the discourses of philosophy, logic, church practices during the middle ages,  politics of the Holy Roman Empire, the dreaded working of the Holy Inquisition and the great debate about the poverty of Christ.

There are beautiful discussions of literature and books, and how the medieval monks so lovingly sought to keep alive knowledge through books. These discourses between the protagonist of the novel, Bro William, and the other characters are intertwined with the investigation of the murders at the abbey.
At the end, when the monastery burned, Eco's writing keeps you spellbound with pages and pages just about the great fire. That's how good a book it is!
The novel is sprinkled generously throughout with extremely difficult words that needs explanation.
Words like enthymeme, palimsests, semiotics, syllogism, aedificium.
Also many phrases are in Latin, the language of the church in the middle ages. Whew!
My 3rd reading of this book now comes with hindsight, having over the years since read more and knowing better the history of the church, the middle ages, of popes and anti-popes, and a bit of the history of the franciscans. (I worked in a franciscan parish church as a full time administrator years back)
I would recommend this book to you if you are somewhat interested in the history of the middle ages, literature or debates about religious practices. If not, it's better to watch the movie.

The movie itself is excellent, but it departs a lot from the book and take a very liberal re-telling of the novel.
In fact, the producers at the beginning disclaim this disconnect by calling the movie "A Palimpsest of Umberto Eco's Novel"

The main thrust of the movie is about the murders that occur at a monastery, where a debate between the Pope's representatives and the Franciscan friars over the poverty of the church was about to take place.
The protagonist, Bro William of Baskerville, attempts to solve the mysterious murders.
Being erudite but striving to keep his humility as a friar, Bro William gets entangled with the superstitious Inquisitor Bernardo Gui (a real person in history).

I shall not spoil your interest by telling you the story but it may suffice to know that the book ends completely different from the movie.

If you wish to watch the movie, it's actually available on Youtube, but I can't guarantee when it will be pulled for copyright reasons. There are 2 copies of the book at the Clementi branch of the National Library.