Hot under the collar 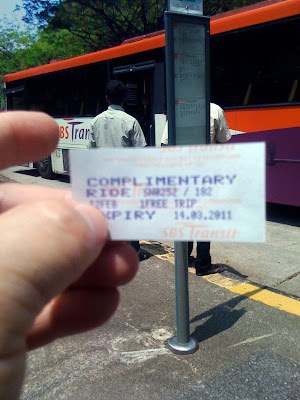 I took a bus to work yesterday in the sweltering heat. SBStransit #182 from Boon Lay bus interchange towards  Customs Checkpoint at Tuas 2nd Link.

The bus was exceedingly warm inside as it left the terminal. I tolerated it, assuming it had been out in the sun, and it would take a while to cool the ambient air inside.

However, after a kilometer or so, the air was still not cooled, and what's worse, it got very stifling.
Other pax'es on board were starting to get vocal amongst themselves, but as usual with most Singaporeans, they grumbled about the situation but did not have the courage to stand up and do something about it. (Guess it's one consequence of living in a closeted environment?)

When the sweat broke out on my brow, I couldn't bear it much more and went forward to the lady driver/bus captain to enquire if she could at least turn up the blower fan speed. She replied that the air con was already turned on and that the blower speed was fixed.

At this point, another Malay passenger came forward and started berating the bus captain over the faulty aircon system. A little to my embarrassment as it felt I was the one who started the incident.

She radioed her control station and they suggested all passengers disembark and board the next bus. A refund and a complimentary ride would be given for the journey onwards, as compensation for the inconvenience. There were about 20 of us on board, mainly foreign workers heading for the factories at Tuas.

This goes to show that if we want something rectified, we gotta stand up and be counted.
Posted by James Tann at 2:57 AM