Today,  I went for my quarterly physical checkup at the government polyclinic.
Actually it was more for the doctor consultation as I went for the blood and urine tests last week with the results only being released today.  And what's the prognosis? 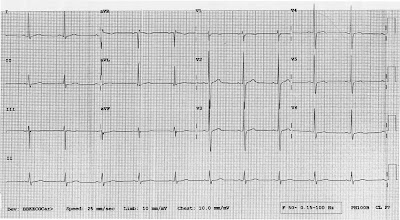 
I underwent an ECG test at the same time and the above chart show everything's normal with the my ticker. Except for some signs of left ventricular hypertrophy, which is still OK.

More important to me were the results for the Big Three! (Diabetes- Hypertension-Cholesterol).

At my last visit to the doctor in August, I had my cholesterol medication changed from Lipitor to Simvastatin, the more generic form of medicines (statins) to control cholesterol, and was anxious to see if it had worked. The earlier Lipitor medication had brought my cholesterol levels down from a high of 200+ to 145 (even down to 139 mmol/L at one stage). If it had not worked for me, I would have requested a switch back to Lipitor despite the higher cost.

Here is the official lab report.


In short, my cholesterol has remained stable at 145 mg/dL (3.8 mmol/L).
Glucose level is in the optimal range.
Just to watch my salt intake and exercise a bit more!

The cost of the tests and consultation? S$66.14 but I only paid $38.40 for everything, inclusive of 3 months medication, as the rest was covered by Medisave.

My next quarterly check is due at the end of January 2011.
Stay healthy, eat healthy and live long!
Posted by James Tann at 4:14 PM