Should I tell the Pope I was an abused child?

He's having a crisis of major proportion arising all over his domain. From USA to Italy, Ireland to Malta, paedophile priests are popping up faster than you can say Holy St Joseph!

But if you know the history of the Catholic Church, he will survive it through, no doubt about this. The Catholic Church has been in existence for 2000 years. It is the only organisation existing today that has survived every other government, regime, dynasty or political entity in history. And it is essentially the same organisation from the beginning till now. Think of what it takes to do that and the power it wields to keep the organisation going for all this time! In other words, don't mess around with the Catholic Church!

Scandals have rocked the church before, some to its very core, like the Reformation, but ultimately, the Church continues to survive.  Having some deviant priests and religious are nothing new, why even the infamous and scandalous Borgias became Popes! The only difference today is the speed at which scandals are broadcasted throughout the world. And with ambulance chasing lawyers out for fame and a quick buck, the scandals are easily blown way out of proportion.

But that is not to say I condone any sexual misdemeanour by the priests, and I do sympathise with  those victimised young minors and the trauma they went through. 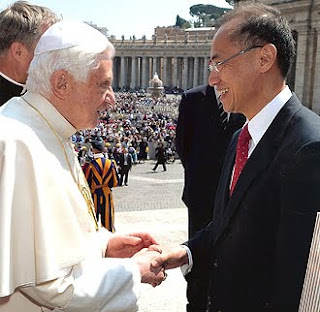 Hmm, maybe this would be a good opportunity for me to tell the Pope of a shame that I carried for the last twenty odd years?

I want to tell him I was a victim of child abuse. I want the chance to tell him face to face and see him weep like he did in front of the victims in Malta.

Yes, I was an abused child and I have the evidence to prove it.

For all my adult life, I carried what I assumed were birthmarks on my body.  Hell, I even remembered being told by my mother that they were birthmarks. When I got married, my wife inquired about them and out of the blues it struck me that the marks were suspiciously not congenital!

No CSI  experts are required to tell me that my 'birthmarks' are an exact match of some despicable person's finger positions! Here are the photographic evidence to prove it.

These 'birthmarks' are the remnants of the abuse that I suffered as a child! No doubt about this too. Only that I have no memory of who did this despicable act. Someone pinched me so hard that the bruises became permanent.
Yes, I want to tell Pope Benedict XVI that I was an abused child. I want His Holiness cry for me!
Posted by James Tann at 3:26 PM