These are the results of my HBS scan. 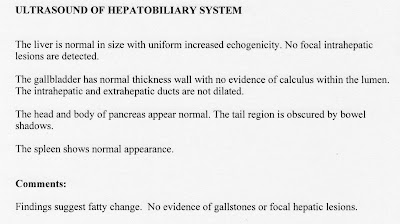 And these are the scans, for the curious, or the learned who can interpret.
(click on the image for a detailed view) 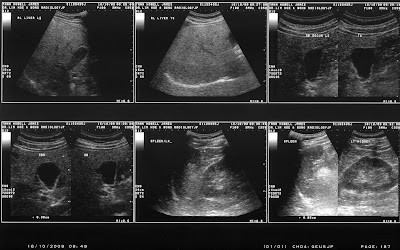 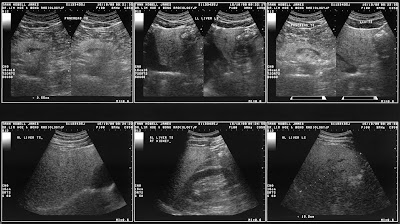 The Doc said, according to the scan, everything is normal.
So do I have diabetes?
Blood glucose test result was 7.9 mmol/L (143 mg/dL)
Technically, yes I do. The acceptable threshold being 7.

But this is way below the 19 mmol/L that shocked both me and my GP last week. This was the reason for the scan and further blood tests. Just 2 months ago in August, the blood glucose was OK at 110 mg/dL (6 mmol/L). What made it shoot up to 19 in a matter of 2 months?
Glucose level 19 meant severe renal problems which , thank God, I don't have.
Was the previous test result faulty? not likely as it came from a reliable test lab.

My own take on the episode was that prior to the blood test which I did 2 weeks ago, I had indulged somewhat in larger intake of sweet stuff during the past week. These included milkshakes, Andersen ice cream (their booth is just outside my office!), and lattes and cappuccinos from Coffebean. I am sure these contributed to the high glucose readings as a result. My own fault I guess.

During this past week, while being prescribed Glipizide to lower the blood sugar, I had also cut out all sugary and starchy foods. Diet had changed immediately and I have lost 2 kgs in weight already.

Next is to get the feet moving outdoors for more exercise. That is the tough part!
Stay in touch for more updates on my health.
Posted by James Tann at 1:11 PM