The customer is always right? #2


Last Sunday, The New Paper On Sunday, had an article by Elysa Chen.
In it, she reported on the phenomena that occurs in major departmental stores in Singapore, in particular at the Ikea Store in Tampines.
I transcribe and extract parts of the report for you .....
Ikea customers treat store like giant playground. They jump on beds, eat, work and sleep here.
Someone even used toilet bowl in showroom.
Like little Godzillas going on a rampage, they run through showrooms shrieking, jump on beds and punch holes into leather sofas with Ikea pencils.
What's worse, some of the culprits are adults.
A store assistant, who has worked at the Ikea Tampines store for thee years, said: "I have seen adults jumping on the beds. One bed broke, and we had to change the entire set, which cost $699."
Once, she also had to scoop urine from a toilet bowl in a showroom.
Another store assistant, who has worked with Ikea for 10 years, said: "After weekends, it looks like a tornado had gone through the store." Toys are strewn on the floor. Books on bookshelf displays have been chucked back haphazardly. Beds are a mess of pillows, quilts and bedsheets. Walls are scribbled on. Packaging is torn.
The New Paper observed some shoppers who looked like they were doing their office work, while others lounged barefoot on sofas and took after-lunch siestas in armchairs.
Taking advantage of Ikea's family-friendly concept were Mrs Dawn Tan and her children, aged 3 to 8. Mrs Tan sat in one of the bedroom displays as her children climbed onto beds, crawled from one display into another and rocked on mini see-saws.
"At home, my children only have one bedroom set. Here, they get various different settings. It becomes their playground," she said.
A father, who wanted to be known only as Mr Mohd, 33, dropped off his two sons, aged 6 and 4, at the play area before leaving to meet his wife in Pasir Ris to run some errands.
"The childrens' play area has more facilities than the neighbourhood playground, and I know my children are well cared for here," he said. 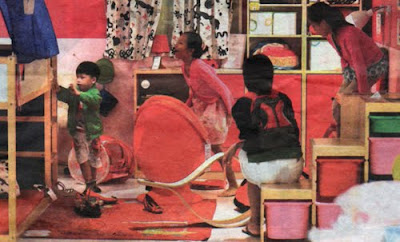 Photos from The New Paper On Sunday

I do not work for Ikea, but I do empathise with the situation. How some adults can be so senseless. Don't they simply realise that the store is open for business and not being run as a playground for their kids?

My store has its fair share of the above, like spillage on carpets and beddings, even with large sign proclaiming "No food and drinks in the store please". Shoppers with supermarket trolleys ramming and denting fridges and washing machines!

Just last week in my store, a child was so in need of a toilet that the parent simply let her defecate right on the shop floor! And what's more??... they simply rushed out after the incident without a word of apology or even feeling guilty about it, leaving us literally to pick up their shit!

One myth that seems to defy Singaporean mentality is that department stores and malls are public places. They are not! They are private organisations, and these organisations have every right to deny you passage or even to evict you. Entering the stores imply that the customer accept any rules and regulations implicitly or explicitly expressed by the various stores. These include no food and drinks, no photography and most certainly no defecation on the premises!